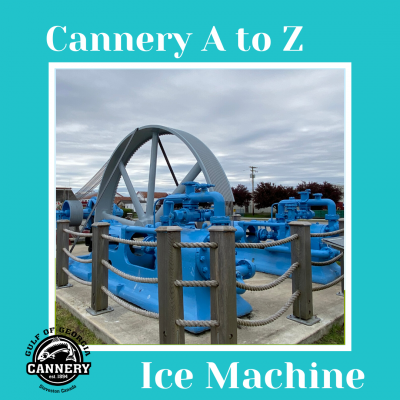 Have you ever wondered about the story behind the big blue machine on display at the entrance to the Cannery parking lot? This machine, called the Triumph Ice Machine, is more than 100 years-old and played a key role in an important change to Canada’s West Coast fishing history: the change from preserving fish by canning, to freezing, or being kept fresh on ice. The Cannery’s Triumph Ice Machine was restored and moved to its current location in November 2016, after sitting to rust in an outdoor shelter, unseen by passersby. This machine was part of a system that  made 300-pound (that’s the weight of an adult gorilla!) blocks of ice at the Home Plant of the Canadian Fishing Company (CANFISCO) in Vancouver.

Beginning in the 1930s, these huge blocks of ice were delivered by truck to the Cannery in Steveston, which was also owned by CANFISCO at the time. The blocks were then loaded directly into the top floor of a building called the Ice House and crushed into shaved ice as they descended to the floor below. There, they would be packed into wooden boxes along with fresh fish. These boxes were then taken back into Vancouver and sent out to customers. Putting fish on ice was complicated, and it required a lot of planning and equipment. But it was worth it, because by this time customers were more interested in buying fresh foods – home refrigerators and freezers had been recently invented and by the 1950s it was clear they were here to stay.

While canning was a popular way to preserve salmon from the late 1800s until the early 1900s, that popularity did not last forever. Even though canned salmon is delicious and easy to take anywhere, it is nowhere near as popular as it was before the invention and popularity of ice machines, home refrigerators and freezers. The ways that food is processed and preserved are constantly changing. Take a look at your kitchen and imagine how it would be different 100 years ago.