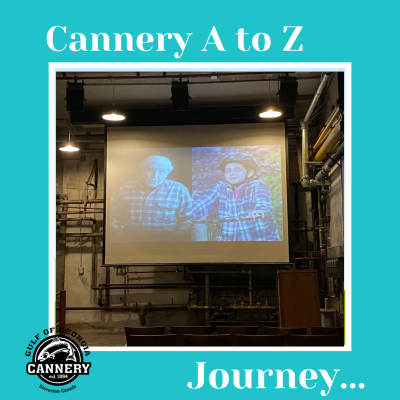 A “Journey Through Time” is often used to describe the experience when visiting the Gulf of Georgia Cannery National Historic Site. It is also the name of a charming film which first premiered in the Cannery’s Boiler House Theatre in 1996. The film has been seen by thousands of visitors to the site, young and old. It has been used as an orientation film to complement our guided tours and school programs for over 20 years.

The film features a young girl, Jenny, who is going on a class field trip to the Cannery. When she tells her parents, the father explains to her that the fishing industry was  not very kind to his own father. The story continues with Jenny on the field trip, splitting from the group and – surprise! – meets her Grandfather, a friendly ghost who leads her on a journey through time, describing the history of commercial fishing on Canada’s West Coast. In the end there is family harmony and understanding…you will have to see the film yourself to see how that happens.

While the film definitely shows the patina of time, it provides an easy to understand explanation of how the industry worked, including some stories of historical inequities. It has served its purpose as a good introduction to the site and our history, if visitors are unable to take a guided tour.

In 2018, with the support of the Province of British Columbia, the Society produced an updated film, “Ebb and Flow: Turning Points in West Coast Fishing History”. This 25-minute documentary-style film is recommended for older audiences, and is available with English, French, Chinese and Japanese subtitles in the Boiler House Theatre. It can also be viewed online (French subtitles only) here.