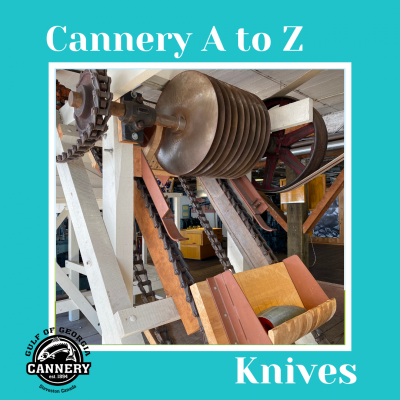 How do the fish get into the can? Over a hundred years ago, canneries employed teams of butchers to cut and slice salmon to pack into cans. A few inventions followed to speed up the process, and today we look at one of the oldest and simplest machines to appear along the salmon canning line – the gang knives.

This oddly-named machine is made up of a row of large circular blades, that are spaced out a few inches apart, to slice salmon into can-sized pieces with speed and efficiency. The machine worked like a Ferris wheel, with the fish being loaded into a wooden basket, which was pulled up to meet the gang knives before coming back down the other side to get loaded up again. By loading a few fish into each basket, these blades could slice a dozen fish in a matter of seconds.When the gang knives were first invented they were powered by a worker who used a hand crank, but later on they were powered by steam. Being steam-powered added an additional layer of safety concerns for workers, who would not be able to stop the blades from spinning in an emergency without walking to the far end of the cannery to cut the steam power and then waiting three minutes for the machine to slow down. In case you are wondering, there was no protective shield or barrier between the blades and the workers. If this was your job, and you wanted to keep all your fingers, you had to be focused and have fast reflexes! Take a look at the tools and kitchen appliances you have at home – think about what kind of safety features they have that we take for granted today. 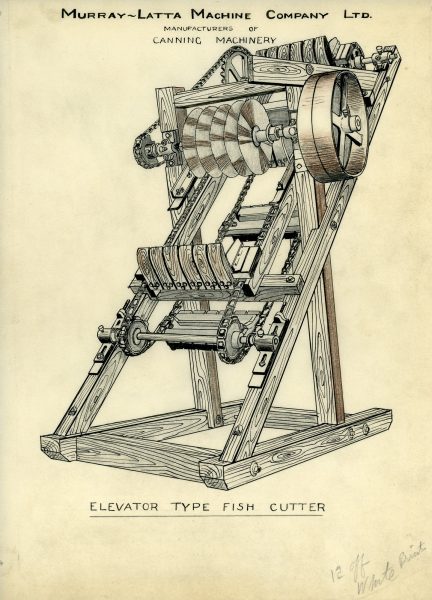