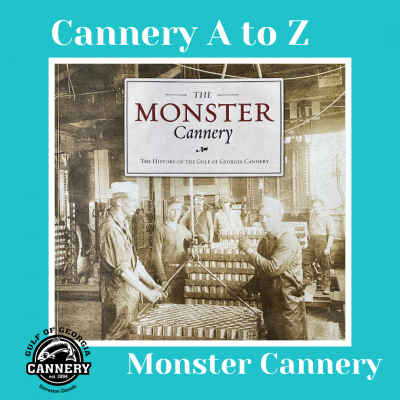 No monsters were canned at the Gulf of Georgia Cannery, but when it opened in 1894 it was the biggest salmon cannery on Canada’s West Coast.  With space for three canning lines, it was dubbed the “Monster Cannery” even before it had opened. While dozens of canneries were already operating at that time, the Cannery that still stands today held the title of largest cannery for almost a decade after it was built. It shared the Steveston waterfront with 14 other canneries and processed fish until 1979.

Through the efforts of the local Steveston Historical Society, the Cannery was designated a National Historic Site in 1976. Later, in 1985, the Gulf of Georgia Cannery Society was incorporated. Over the following years, many people worked together to transform the site into a space where visitors can learn about and commemorate Canada’s West Coast commercial fishing history. Opening to the public in 1994, the Cannery features a unique partnership; it is a federal site operated by the non-profit Gulf of Georgia Cannery Society on behalf of Parks Canada.

With a history that is now more than 125 years old, there is a lot to know about this building. For kids who are keen to learn more, My Monster Cannery is a great book that follows a young child who works at the Cannery. The book can be found online or purchased in the Cannery gift shop. For a more in depth look at the history of the Cannery, The Monster Cannery book offers a detailed, highly visual guide to not only this Cannery, but to the history of the commercial fishing industry on Canada’s West Coast. Our history, like so many other canneries’, includes stories of hard work, adapting to new technology, social changes, and immigration. Whether or not you’ve thought a lot about canned salmon, you may be able to find a connection to your own history at the Monster Cannery.

Posted by m.horita
Cannery A to Z: L is for Label
Spot Prawn Season in Steveston