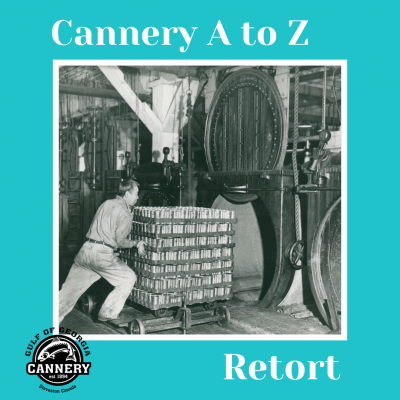 Let’s get cooking! One of the hottest areas inside the canneries was by the retorts. A retort is a high-pressure machine that cooks the salmon in the cans, heated by steam – like a giant pressure cooker. Retorts had heavy iron doors and they were so big that you could walk inside of them. Cooking canned salmon in a retort took one and a half hours, at a relatively low temperature (242F) and each retort could cook thousands of cans at a time. Workers would stack cans in layers and push huge amounts of them into the retorts (see photo above). It was a physically draining job.

Retorts played an important role to speed up the salmon canning process. Cooking the salmon when they were already sealed in the cans was a practical way to kill bacteria and soften up the bones, which were often left in canned salmon in the early days. This step in canning salmon wasn’t always so fast. Before retorts were invented in 1877, cans were slowly cooked in a salted hot water bath (like an extra hot hot tub) while workers hand-sealed them at the same time. When the first retorts were invented, they worked more slowly and were difficult to use. Over time, the retorts were improved, and as the cooking time got faster other machines were invented or improved to speed up the earlier steps in the canning process. Even though it is one of the last steps to can salmon, the invention of retorts removed a major bottleneck, speeding up the time it took to can salmon. 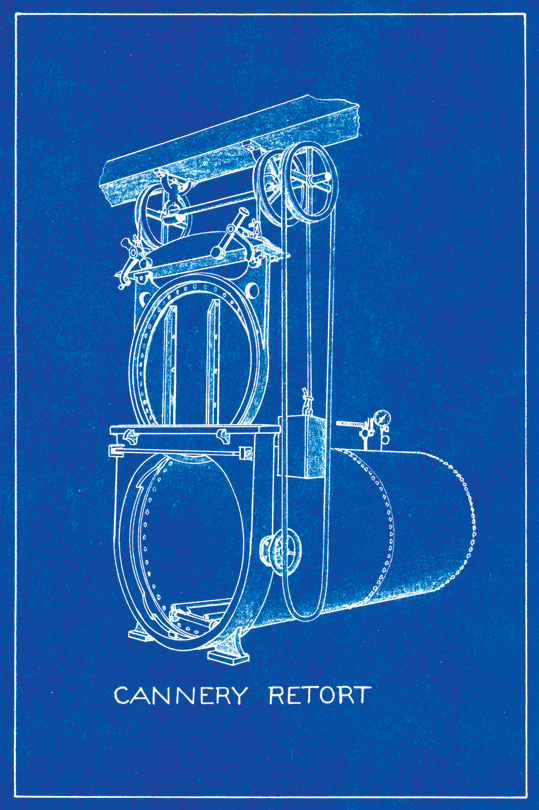