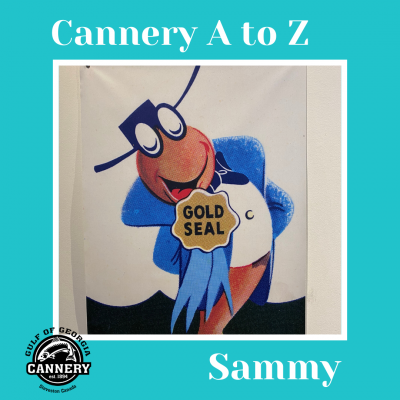 Please can I get it? Please please please – I want it! – This might sound like something a child would say in the candy aisle, but can you imagine it happening over canned salmon?

In the 1940s the Canadian Fishing Company (CANFISCO) hired the Walt Disney company to design a character who would appeal to kids so much, that they would ask their parents to buy canned salmon. The cartoon character was called Sammy Salmon (full name Sammy Gold Seal Salmon) and he was joined by other characters including Wally Walrus, Percy Panda, Pete Pelican and Sneak Seagull on his adventures. Children would learn about these adventures through comic books that were given out at schools. Then, when they accompanied their parents to the grocery store, they would be able to recognize the canned salmon brand with Sammy Salmon on the label.

Sammy Salmon first appeared in 1943 during World War II. At that time, many men were fighting overseas, leaving more women and children at home. This meant companies were starting to think about how to appeal to families, and by focusing on kids, they were thinking ahead of their time. Although you don’t see Sammy too much these days, Gold Seal is one of the oldest brands in British Columbia that to this day continues to sell many canned fish products. Marketing to children became more common from the 1950s onwards – do you remember a favourite cartoon character or toy that you associate with a particular food?