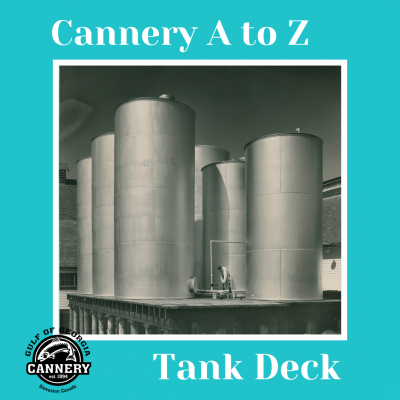 The Gulf of Georgia Cannery was a significant producer of fish oil  for animal feed during its period as a herring reduction plant from the 1940s to 1979. The large outdoor deck on the East side of the Cannery once housed eleven large fish oil tanks which could contain the equivalent amount of liquid as 230,000 large jugs of milk!

These huge tanks are hard to imagine today, but there are still two of them left standing to give a sense of the scale (see archival photo above for an image of the full tank deck taken in 1943). The oil came from reducing herring and dogfish which produced vitamins A and D. This product was produced for the Canadian Fishing Company (CANFISCO) and was known as Gold Seal Brand “Feeding Oil.” It added a nutritional boost to animal feed.

Today, the Tank Deck has been transformed into an outdoor gathering space, and has hosted a variety of events such as community beer festivals, multicultural celebrations, and the annual summer concert series Music at the Cannery. This year is a unique year that has seen the cancellation of many of these events, but we look forward to welcoming the return of the community with festivals and celebrations on the Tank Deck when it is once again safe to do so.

Posted by m.horita
Cannery A to Z: S is for Sammy the Salmon
Canada Historic Places Day Selfie Contest