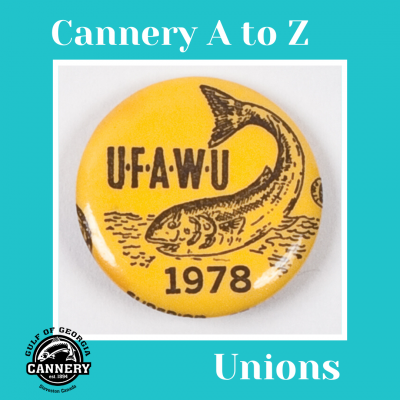 The history of unions in Canada’s West Coast fishing industry has changed a lot since they first appeared in the late 1800s. Unions – an organized group of workers that collaborate to improve working conditions and negotiate with employers – in this industry initially began with groups of fishermen who were segregated based on race; fishermen of Japanese descent, European descent, or Indigenous were all represented separately even though they did the same job.

Although workers would not be represented together until the United Fishermen & Allied Workers Union (UFAWU) was formed in 1945, there were moments when the segregated unions stood with each other. One well-known incident was the strike over the amount of money paid to fishermen per fish. This strike took place over 120 years ago, and resulted in the military being called in to Steveston.

As the commercial fishing industry on Canada’s West Coast grew, unions began to include those who worked on the shore and in the canneries. These jobs were essential, but usually seasonal, with many workers standing by for a call to come in to process the catch. Companies could demand availability on very short notice which made it challenging for women in particular, who were typically taking care of children and could not drop everything and get to work at a moment’s notice. Over the years, the unions representing a wide diversity of groups before joining into one, effectively raised the standards for working conditions, wages, and benefits for workers in the fishing industry.