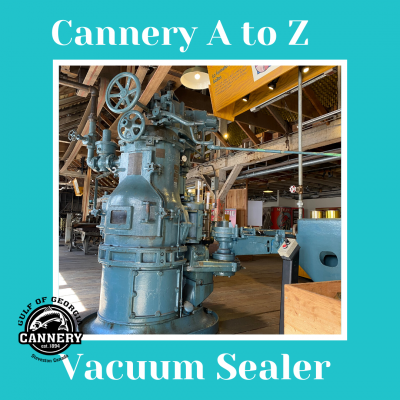 “This machine really sucks!” is how some of us introduce the vacuum sealer to kids on a canning line tour. Ironically, this was one of the most important machines to be used in the canneries

Most machines on the canning line were complicated, fast, and sharp, but there is one machine that made working in a cannery more safe – the vacuum sealer, also known as vacuum closer. This machine was invented in the 1920s, originally for the coffee canning industry, but it was in almost every cannery on Canada’s West Coast by 1939.

The vacuum sealer sucked air out of cans filled with salmon while fastening a lid to the rest of the can, forming a tight seal. A dozen cans could be whizzed through the machine in a matter of seconds. But how did the vacuum sealer make working in a cannery more safe?

Up until that point, workers attached lids to cans using liquid lead solder. They would place lead on the rim of the can, press the lid on, and put the can in a hot salt water bath. This would start to cook the salmon. As the can got hotter, any air left inside would expand, causing the lid to “puff up” or inflate. When it was almost ready to burst, workers would then poke a hole in the lid to let the air out and quickly cover that hole with more lead. This would seal the can so it could keep cooking safely, but it also meant that customers were getting a good dose of heavy metal with their canned salmon, not to mention the effect on the workers who were exposed to a lot of lead in their time at the cannery. While the dangers of lead were not well known at the time, we now know that this much exposure to lead is not healthy. Even though the vacuum closer was complicated, fast, and sharp, like many other machines on the canning line, the benefits of sealing cans quickly and without lead means it is also known as one of the most important machines that most improved the health of cannery workers and consumers.

Posted by m.horita
Music at the Cannery – cheers to local artists!
Cannery A to Z: W is for Wheelhouse