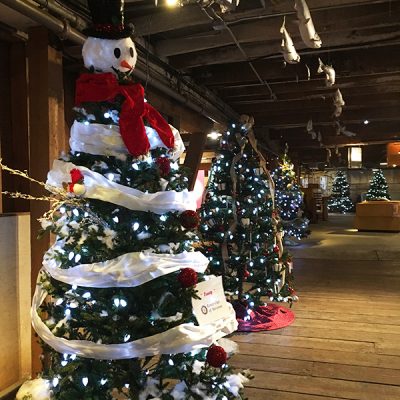 This Sunday December 18th was the last Cannery Farmers’ Market of 2016, with the next market returning in the new year, on January 29th. It also happened to fall on the third wave of ‘snowmaggedon’ for Metro Vancouver, with a dump of unexpected snowfall throughout the lower mainland. Despite the weather, over 85% of our wonderful vendors showed up for the market, in addition to local musicians, Norine Braun, Alice Fraser, and Terry Banks, who brought festive cheer and music for the visitors and vendors who gathered for the community market in our little corner of Steveston.

At market closing at 3pm, Market Manager Trish Whetstone announced the winners of the Festival of Trees, as chosen by visitors to the Cannery during the first 3 weeks of the festive display. From Dec. 1-17, a token to vote for their favourite tree was given to every museum visitor, and to those who brought a donation for the Richmond Food Bank.  In this year’s friendly competition, the tree which received the most votes  was the Rotary Club of Steveston’s charismatic “Frosty”;  followed very closely by local dental office Steveston Smiles with the brilliant “Shake Your Tail Feathers”; and in third place was “The Heart of Steveston – People, Places, Programs” creatively decorated by the Steveston Community Society. If you haven’t had a chance to see the trees yet, don’t despair — the trees continue to be on display until Dec. 31st!

A big thank you to all of the Steveston merchants and community organizations who participated in this friendly competition, and to the Steveston Merchants Association for their partnership in presenting the event.

Posted by m.horita
Christmas on the Homefront
Scarves for NATO servicemen and women