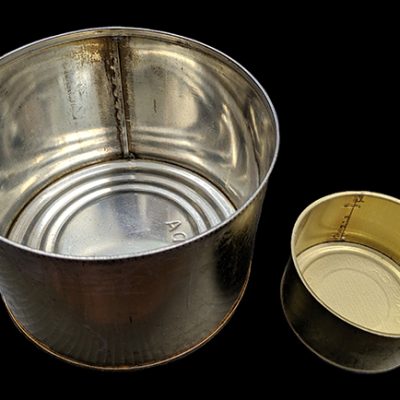 Three 4 lb size salmon cans were recently donated to our collection from the Zesko family. These cans, which were typically produced for institutions where food is prepared and served in large quantities like restaurants, school cafeterias, etc. were originally collected from the BC Packers Imperial Plant here in Steveston in the 1970s by Helen Zesko. Helen, who worked at the plant in various departments for over 40 years between 1940-1989, acquired the cans after they had already been opened and emptied at the cannery. As it turns out, they were the perfect shape and size for her to use for baking her special Easter sweet bread called Paska!

These cans and their story, along with an oral history interview that Helen did in 1999 about her experiences working in the fishing industry, and an expected future donation from the family of her fillet knife, sharpener, and album of photos from her time at Imperial Plant all represent an important perspective of the fishing industry that we will be able to share with the Cannery’s audience now and for years to come!

Listen to Helen’s interview from 1999 here.

Check out the recipe for Helen’s Paska (adapted by her daughter, Judy) below:

Mix Saffron and water and “steep” until water cools and liquid is deep orange colour. Strain and discard the filaments. Keep the liquid.

Dissolve 1 teaspoon sugar in lukewarm water and sprinkle the yeast over it. Let stand 10 minutes.

Beat eggs until foamy. Gradually beat in the 2 cups sugar, a small amount at a time and continue beating for about 5 minutes. Add the melted butter and slightly cooled milk and mix well. Pour into a very large bread making bowl. Add the rum and saffron liquid along with the orange juice and zest. Beat in 4 cups of the flour. Continue to add flour, one or two cups at a time, kneading until a soft dough is formed (you may need more than 10 cups of flour). Mix in the raisins.

Paska is traditionally baked in round pans that are at least 4-inches deep. Some individuals also use large, tall cans (such as juice cans). However, it is important to remember that often the insides of food cans are coated with various materials to prevent rusting. These cans may not be safe to use in hot ovens. The Paska can also be baked in regular loaf pans.

Regardless of the baking container, the pans must be greased well with shortening to prevent the sweet bread from sticking.

This recipe should make 4 to 6 loaves of bread. This depends on the size of the pan. Cut dough into pieces that would fit into the pans. Form each piece into a smooth ball and place into greased pans. Bake at 325°F until golden brown, about 30 to 40 minutes. Cool baked bread in pan for a few minutes, then gently remove and place on a cooling rack. Let cool completely.

I often make about 4 loaves of bread. With the remainder of the dough, I make buns. Buns need to be baked for about 20 minutes.