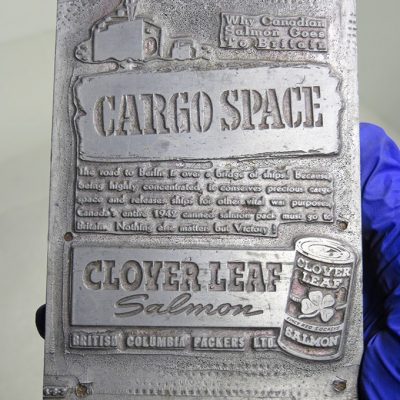 In 1942, Canada’s entire canned salmon pack was sent to Britain for the war effort. Canned salmon was an excellent wartime food; high in protein, very filling, and easily shipped. This stamp was used for printing ads in magazines. As the fine print says:

“The road to Berlin is over a bridge of ships! Because, being highly concentrated, it conserves precious cargo space and releases ships for other vital war purposes, Canada’s entire 1942 canned salmon pack must go to Britain. Nothing else matters but Victory!”

This meant that in 1942 canned salmon was hard to come by on the home front in BC, one of many sacrifices made at home. If you’re interested in the creative ways people made do in Canada during the war, come see our current feature exhibit Women on the Homefront: Women’s contributions during World War II, or attend our 1940’s inspired Knit-in event this Saturday July 23rd, 1-3pm (program fee is included in museum admission).

Posted by m.horita
Tales from the exhibit – Women on the Homefront
Music at the Cannery continues this Friday!