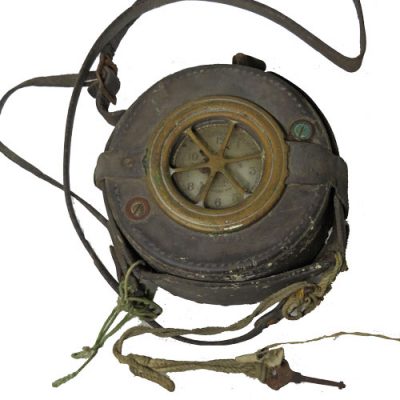 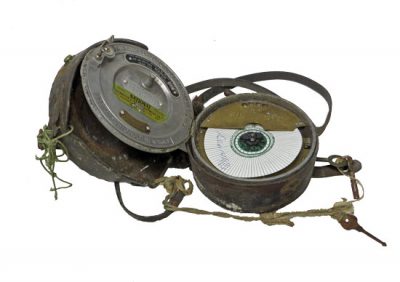 A watchclock is a piece of equipment used by companies to track the movement of a security officer during his watch. The watchman would wear this watchclock around his neck, and throughout his route there would be watchclock key stations mounted to the wall. Inside each station was a key which he would insert into the clock, and the clock would stamp the time he checked in, on a wheel of paper. His supervisor would then open the clock (which would puncture a hole in the paper, to prevent fraud) and see when and where he had been. In this way the supervisor was assured that the watchman had properly completed his duties during his shift.

We believe the model we have here is a Detex Alarm 602, made from about 1927 to 1947. The model has a label in it that says it must be cleaned and oiled on or before March 1936, so we figure this machine is probably from c.1935. It was donated to us by Mary Seki on behalf of her husband Tosh Seki who worked at Ocean Fisheries, so it’s likely that this was used by a watchman there.

Posted by m.horita
Harpdog Brown Comes to the Cannery!
We CAN Do It! Life Hacks of the 1940’s