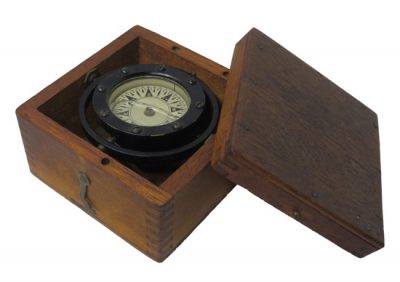 This week we have a Dirigo compass suspended in a dovetail wooden box. We’re not sure of the exact origin of this compass, but Dirigo began making compasses in Seattle in 1907, so it’s possibly quite old! Early compasses consisted of a magnetized bar or needle floating in a dish of water, similar to what we have here. The water allowed for the needle to move quickly and easily, rather than sliding against the housing. As you can see, over time some of the water has escaped/evaporated, leaving us with a little air bubble.

As navigation aids, compasses are certainly better than nothing, but they are not without their faults. One problem is that magnetic north and true north are not the same, which means compasses had to be designed to compensate for the resulting magnetic declination. The magnetic needles in compasses were also affected by the steel in ships. And then there is the sea itself, which practically guarantees that a compasses will never be read at rest and perfectly horizontal. To solve this problem, gimbals, such as the one this compass is resting on, were devised to keep the compass constantly suspended. No matter which way the sea tossed and turned the compass, the face would always be upright.

Posted by m.horita
Knitting, Spinning, and Storytelling at a 1940’s Knit-in
Collections Catch of the Week – Discharger Rockets