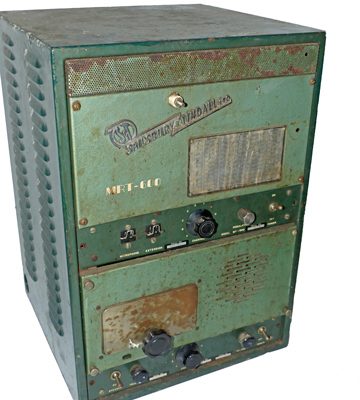 This week we have a Spilsbury & Tindall Alternator Radio. This was a fishing boat’s radio unit, with programmed channels for ship to ship, weather, distress, and calling Vancouver. One could call to Vancouver and an operator would dial local numbers for the caller, a pre-cellular way of staying in touch with family and friends at home on longer trips. Today there are still radio units on ships, but they’re often used in combination with satellite phones and the like.

The Company “Spilsbury & Tindall Ltd.” was incorporated in 1941. Founded by Jim Spilsbury and Jim Hepburn, their specialty was repair and maintenance of radio equipment used in remote areas and on boats. In 1943 they designed and built their first radio, the Model MRT-75 Marine Radio. Later that year Spilsbury purchased a single engine sea plane for transportation to service his customers. The bush flying operation eventually grew into the Queen Charlotte airlines, which became the 3rd largest airline in Canada!

If you’re interested in seeing this radiotelephone in person, come check out the next event in our Life Hacks of the 1940’s series this Saturday! On August 20th we will be hosting Dots + Dashes + Radio Waves: A Look into 1940’s Wartime Communications. Come visit the Cannery between 1 and 3 pm to experience WWII-era communications firsthand.