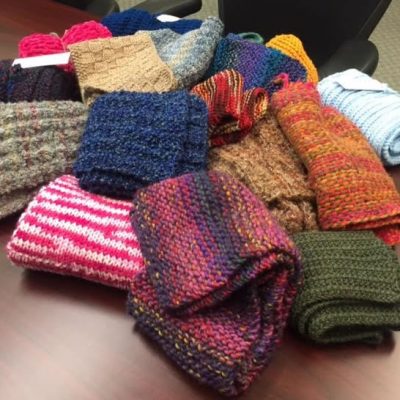 This summer, we offered a fun series of programming called “Life Hacks of the 1940’s”, to complement the Cannery’s current feature exhibit Women on the Homefront. We invited a local radio club to provide demonstrations on radio communications and nostalgic radio dramas; we also held a ‘knit-in’, inviting members from local knitting clubs to provide simple lessons on how to knit a scarf, taking a hint from the activities of women on the homefront who helped knit articles of clothing to send to the troops during WWII. During the knit-in, we asked participants to consider knitting a scarf to donate to local members of the Canadian Armed Forces, who are currently serving overseas on NATO missions in Poland, the Ukraine, Iraq, and the Middle East. Our goal was to collect 14 scarves to donate to servicemen and women before Remembrance Day.

By November, we were delighted to collect 18 scarves, knit by Cannery volunteers, and members of Richmond’s Anglican Church knitting group. The scarves were then donated on behalf of these volunteers to the 39 Canadian Brigade, who in turn sent the scarves military personnel currently serving Canada on NATO missions around the world.

Then, to our great surprise and delight, we began to receive the most unexpected thank you letters from the recipients of the hand-knit scarves, the excerpts from some of which are copied below. It must be difficult enough being away from family during the holiday season; to think that these wonderful military personnel serving Canada overseas had taken the time to write us these notes, has touched us very deeply.

“I’m currently serving on NATO’s Operation Reassurance … in Eastern Europe. I would like to thank you and all the wonderful ladies who knitted this scarf for me 🙂 as it is very cold here ! I’m an Island boy born and raised, in the Cowichan Valley so this Eastern Winter is not for me…This will be the second Christmas I’ve missed do to deployments.  It means the world to us here to receive packages from random Canadians. Sometimes it seems the Canadian population forgets about us, but these messages and gifts show us that there are people that support us.

So from the bottom of my heart, thank you again.”

“I would like to send a note of thanks to your team of knitters.  I am stationed in eastern Europe right now, with Operation Reassurance.  It is a beautiful country with delightful people.  However, picture a grey day in Vancouver, add the occasional Edmonton temperature, and remove all the Starbucks.  That is pretty much where I am until the end of February. Last week I returned back to our base from three weeks on exercise in Lithuania, and found a box on my desk.  Someone from Vancouver had sent me some Christmas goodies and enclosed a scarf.  It is bright and cheerful, and is the perfect antidote to the weather here, just south of the Russian border.

I am grateful to everyone who sat together and kindly created these beautiful scarfs.  I will be wearing mine while here, and will keep it as a reminder of the thoughtfulness of the people back home.

If possible, please pass on my appreciation to anyone involved in the project.  Your kindness has meant a great deal to me.”