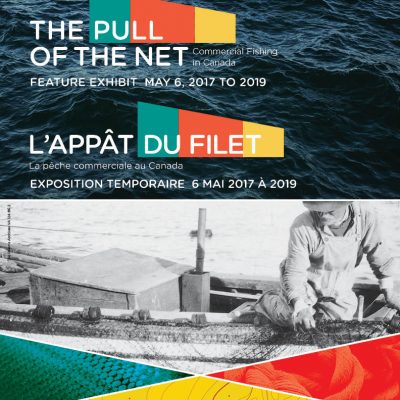 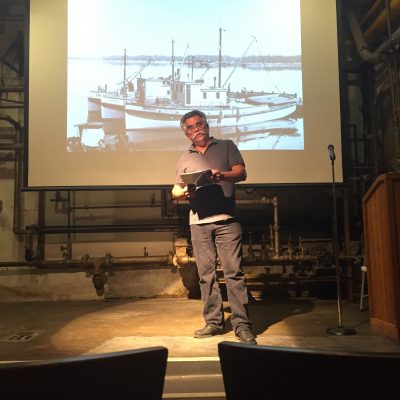 The Pull of the Net exhibit celebrates the importance of Canada’s commercial fishing industries on both the East and West Coasts of Canada. It is a colourful, family-friendly exhibit that touches on some big topics such as Aboriginal fishing traditions, immigration, fisheries management, and the diversification of the industry over time.

To delve deeper into these topics, local experts will share their perspectives and insight on these topics with a 4-part speakers’ series on Saturday afternoons through the summer. The last of the series is the River’s End Fisher Poets gathering on Saturday, September 23rd from 2 to 3:30pm. Admission is FREE.

A crew of current and retired commercial fishers will share their creative writing about the industry in this celebratory and casual afternoon. Local fisher poet Wilfred Wilson and friends were inspired by fishing the many rivers along BC’s rugged West Coast. The allure of fishing will shine through their words. This is the second year that the Cannery has hosted the gathering organized by Wilson and inspired by the annual FisherPoets event in Astoria, Oregon.

Posted by m.horita
Pull of the Net Speakers’ Series: A View from the Harbour – 100 years of change
Music at the Cannery – Cannery Row

gogcannery
Last Saturday, our Visitor Services Coordinator Pam took these gorgeous photos from our dock. How lucky are we to h… https://t.co/nM510OOErg
Tweet
gogcannery
RT @ShadyPirates: Now that the #Christmas season is coming into full swing there are some great ways to celebrate! Don't miss the festiva…
Tweet
gogcannery
To learn more about this event, and other Winter in the Village activities, visit: https://t.co/H14M9zz3aK.
Tweet
gogcannery
Event hosted & managed by @VisitRichmondBC in partnership with Pathfinder Pet Care and Dog Ranch & the Gulf of Geor… https://t.co/enbPH8Ygmn
Tweet