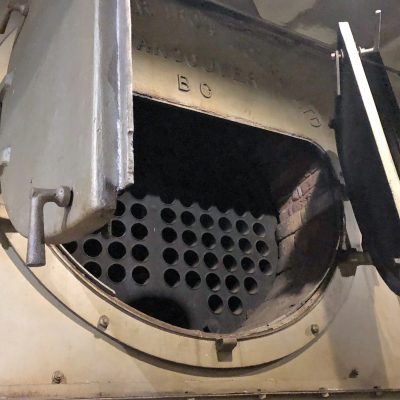 The Boiler House Theatre used to be the boiler room for the steam-powered machines to can salmon during the Cannery’s early years.

Canned salmon was produced here from 1894 to 1930, and made use of many machines which were all steam-powered. Before steam, power was generated by animals, wind and water. However, those power sources were often uncontrollable and depended on the location of the site. With steam engines, you can control the factors and use them anywhere you would like.

Fire is started up with fuel below to boil the water. The hot gas created by the fire would travel through fire tubes – the many large holes in the middle (see close up photo above) – in the boilers, making it faster for water to be transformed into steam. The steam would be sent to the inside of the Cannery to power the machines. The hot gas would then be released into the air outside of the Cannery, a source of large volumes of pollution back in the day.

Since the boilers were under high pressure, workers had to be meticulous to check that the fuel, pressure and oxygen levels were at a specific point, or the boiler could fail, or even worse, explode. Therefore, this could be a tough and dangerous job.

Despite all of these concerns, boilers and steam power were very important for canneries because they allowed machines to run efficiently and quickly. For cannery owners, efficiency and speed were key to gaining high profits on canned salmon. Therefore, steam power is one of the reasons why the canning industry became successful.

Come to the Gulf of Georgia Cannery NHS to see these large impressive boilers in person. The boilers may not be functional anymore, but you can come into the Boiler House Theatre today to watch our introductory film, Ebb and Flow: Turning Points in the History of West Coast Fishing.