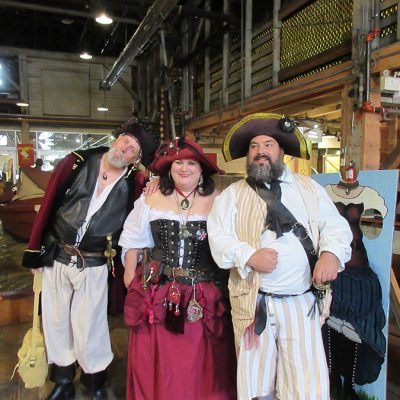 Ahoy, me Hearties! The Gulf of Georgia Cannery National Historic Site received a special visit from our friendly neighborhood buccaneers on September 17th and 18th in celebration of International Talk Like a Pirate Day! As part of our Pirate Weekend festivities, the Shady Isle Pirates, a local non-profit society, set up a pirate encampment inside our museum in order to share nautical heritage with our visitors. The family-friendly event featured a variety of activities for people of all ages to enjoy.

The Cannery was completely transformed for the weekend, with the Jolly Roger being raised on our flag post, and Cannery staff decked out in fun pirate costumes and accessories (including a stuffed toy parrot called Polly!). Inside the museum, a rustic pirate encampment was the focal point of the site, with pirates enjoying a ‘feast’ under lanterns while watching over their gleaming treasure chest. Inside this treasure chest was an assortment of pirate-themed trinkets from which children could choose as a “reward” for completing a scavenger hunt at the museum. Surrounding the encampment was a children’s dress-up area, props for photos, and tables set up with a variety of games and artifacts.

One of the most impressive displays was the beautiful mini-brig Adventure that was placed adjacent to the encampment. The fun and activities continued throughout the Cannery, with storytelling about famous pirates, magic trick performances, and more games in the Cannery Kids Corner. Visitors of all ages got to try out their hand at games such as Ring a Rat, Rats on a Line and the Flintlock Pistol Gallery.

Everyone had a great time learning about and interacting with the pirates, and we look forward to putting up the Jolly Roger again for next year’s Pirate weekend. Goodbye for now, mateys!

Posted by m.horita
Highlights from Ivan Sayers’ Fashion Show “From Rationing to Ravishing”
Seafood for Thought