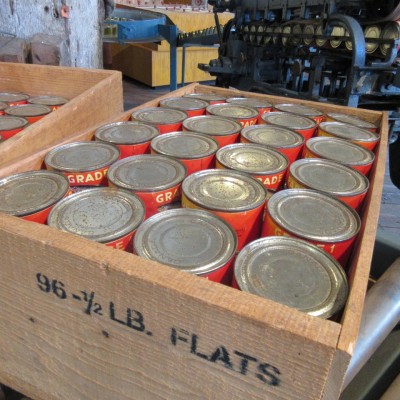 Blarrg! It is February at the Cannery, what would traditionally be the “off” season in the canning calendar. I can see why the workers did not do any salmon canning during this time. First of all, the salmon don’t run up the river until May, April at the earliest. Secondly, the Fraser River is finger-numbingly cold in February. The Cannery is built right on top of the river, which means the water temperature permeates through the 120 year-old wooden floor boards (chilly, chilly…good thing we have a rack of fashionable Cannery jackets for our visitors to borrow!). At this time of year, you will find Interpreters and staff bundled up, equipped with our Cannery toques and invincible Cannery vests.

In the heydays of the canning business, though, the workers did much more than hibernate. In fact many contract crews utilized this “time off” to prepare for the next season, and make a few extra coins. Box-making, can-making and even shellfish canning were done during the winter and spring.

Boxes and cans were originally made by hand, with hammers and screws; before cardboard boxes became widely available, the planks of wood sold to cannery crews to make boxes constituted a big portion of lumber sales in Canada. Talk about job creation! In the later days of the canning business, machines replaced box and can-making crews and eliminated a few problems including lead contamination and export cargo being too heavy. But what of the contract crews? I guess we could be fishing for answers forever…

Well, I’m glad to say the Cannery today is still a bustling place welcoming individuals and crews from down the street and across the world, even in chilly February.

Come by and try our jackets on for size!

Posted by m.horita
A Red Carpet Event at the Cannery!
New outdoor video projection lights up the Cannery