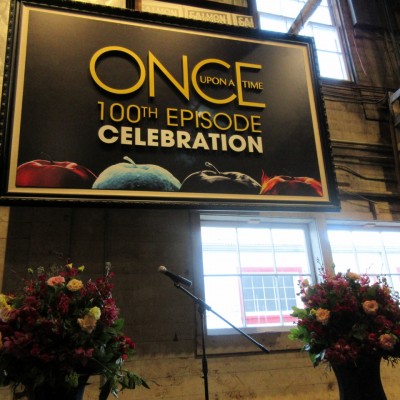 We had a bit of Hollywood-style excitement in our little corner of historic Steveston this past weekend.

The Cannery was the venue for ABC’s Once Upon a Time television series’ 100th Episode Celebration event, attended by many of the cast, crew, writers, television executives, and entertainment media. The event closed the Cannery to the public for two days, as tents, audio visual equipment, bar stations, stage, lounge areas and all the fixings of a grand event were set up on Friday. All the finishing touches — including a red carpet complete with a ‘Step and Repeat’ area — were installed on  Saturday for the big event that evening.

Although we were not allowed to take photos during the actual party, we can share some ‘before’ photos (click through photo gallery above). Most impressive was the massive tent and custom-fit red carpet that was installed around the flagpole deck in front of the Cannery. This area drew the most attention of the fans, many of whom started to gather in Fisherman’s Park hours before the stars of the show were to arrive by limo.

Inside, the Cannery was transformed into a fun, as-fancy-as-you-can-get-inside-a-historic-cannery party venue, complete with green-screen photo ops, (no less than) three bar stations, video screens set up throughout the site to simultaneously premiere the 100th episode, a display of costumes and props from the show, and a huge Once Upon a Time storybook-shaped cake on display in front of the main stage.

For photos of the stars’ red carpet arrivals, and some more photos taken inside the party, see the links below.  Have fun looking for some familiar Cannery backdrops, like our Fish Wall, and flying salmon and herring!

Posted by m.horita
May your long weekend be full of fish, fresh food, and football!
February at the Cannery — then and now