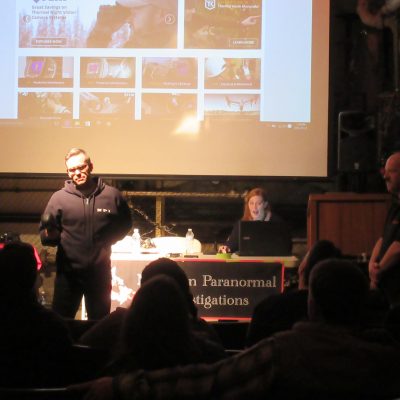 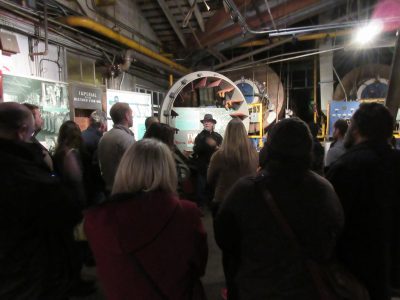 The Gulf of Georgia Cannery is a national historic site rich in BC’s fishing history; it used to be a busy, active site that was an integral part of the lives of many. Now, however, the Cannery is no longer the bustling workplace that it used to be — but does that mean that all the remnants of the cannery workers’ lives disappeared along with the business when it closed in 1979?

The investigators brought a large array of equipment with them and took the time to explain each one’s significance to their work. One of the most interesting tools was a teddy bear that disguises a piece of equipment. They explained that the equipment is designed specifically to communicate with the spirits of children (the spirits are more likely to respond to a teddy bear than to an unfamiliar box-like object). How it works is that the teddy bear is placed inside a room by itself, and then the device inside it will project the investigator’s voice (similar to how a walkie-talkie plays the voice of someone who is talking into another walkie-talkie). The investigator usually asks a question, hoping for a response in some form, and then post-investigation, the team will replay audio and video footage to check for any signs of a response. To illustrate this, a video clip of the teddy bear inside the Cannery’s Ice House was shown, in which a child’s voice responds loud and clear to a question by saying, “Mommy”.

Among the other video clips that were shown, was one taken at the end of the salmon canning line. At this location, the investigators sat and asked a spirit whether she used to work in the boiler room. The female spirit responded by simply saying “line”. This response may not seem very informative at first, but it turns out that there is a lot of information that can be extrapolated from this single word. The investigators interpreted it as the spirit saying that she worked on the canning line and not in the boiler room.

Whether one may believe in the paranormal or not, with a site that has as much history as the Cannery, there’s bound to be one good ghost story or two — and what better way to celebrate the spirit of Halloween!