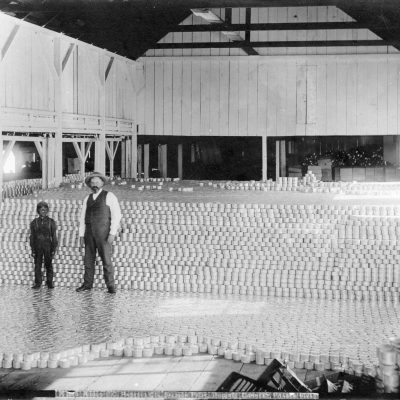 With Environmental History as this year’s theme for Canada History Week (November 23-29) we take a look at the impact of the canning industry on what was thought to be an endless resource of wild salmon stocks, and to their environment.

Once the largest cannery in Steveston, the Gulf of Georgia Cannery packed over 18,000 cases of 96 half-pound cans in the year 1900. That’s more than 1.7 million cans or almost 866,000 pounds of salmon, approximately the weight of four blue whales!

In the same year, there were 15 canneries along the Fraser River in Steveston and 65 canneries on Canada’s west coast. Just imagine how many salmon were fished just for canning in BC. Production was further increased due to the invention of the “Iron Butcher”, patented in 1905 by E. A. Smith, which could butcher up to 60 fish per minute, compared to 5-6 fish per minute by hand.

In 1913, a huge number of sockeye salmon returned to the Fraser River, resulting in a commercial pack of almost 2.4 million cases, or over 229 million cans, of salmon. The amount of fishing during that year negatively impacted the number of salmon in the coming years, since the adult salmon were caught before they could spawn. To make things worse, in the same year, debris from railway rock blasting at Hell’s Gate blocked the salmon’s route to a major spawning channel up the Fraser River. This resulted in one of the worst environmental disasters for the salmon canning industry, which never did fully recover.

Salmon continue to be an important source of nutrients for humans, animals, and other fish in the Pacific Northwest. These are just a few examples of how human interaction with the salmon and their environment greatly impacted generations of not just the salmon but many other species, and is yet another lesson where we can learn from the past to inform our future actions.