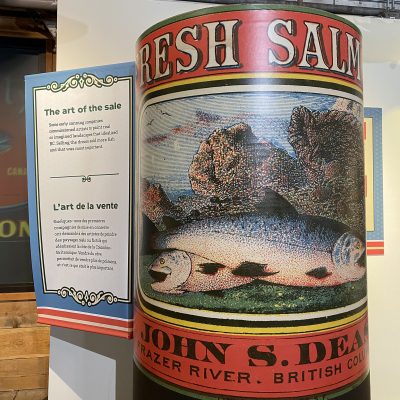 In this entry of “Canned Stories,” we are learning about John Sullivan Deas, African American tinsmith-turned-salmon-canner who came to a small island, which now bears his name, in British Columbia in the early 1870s. Opening his cannery in 1874, Deas owned what was then the largest cannery on the Fraser River.

Following the rise of serious competition in 1877, Deas felt that the Fraser River was not big enough, and that the salmon runs were too limited, for all of the canneries that had opened in recent years. When he applied for an exclusive lease on the salmon drifts that were close to Deas Island, Deas was met with backlash.

The next year, a new cannery which was built nearby Deas’ produced twice as much, confirming Deas’ concerns. He sold his cannery that year, and moved to Portland, Oregon with his wife, where he would spend his remaining years, passing in 1880.

John Sullivan Deas’ successful canning run and contributions to the industry earn him a deserved spot as one of the fathers of salmon canning along the Fraser River.

In celebration of #BCHeritageWeek (February 17 – 23, 2020) why not explore Deas Island Regional Park in Delta, BC, and see the heritage buildings and walk the trails on the island where the Deas Cannery once stood.