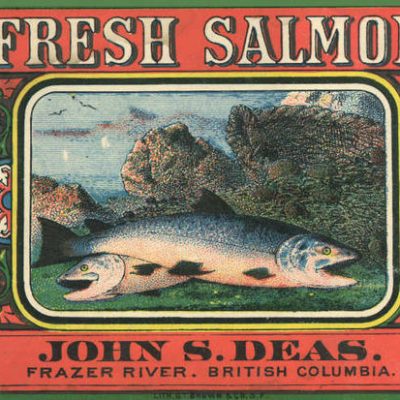 February is Black History Month, and a celebration of the legacy that black Canadians have left in BC history, culture, and economy would be incomplete without the mention of John Sullivan Deas, a salmon canning pioneer who was one of the founders of canning on the Fraser River.

Born in 1838 in South Carolina, John Sullivan Deas was a tinsmith by trade and entered the canning industry shortly after the San Francisco gold rush ended in the late 60’s. The wealth of BC Salmon drew many opportunists, and in April 1873, Deas pre-empted an island at the mouth of the Fraser, which now bears his name. Published figures boast that the Deas Island Cannery produced twice as many cans of sockeye as other competitors at the time and an archived label from the cannery illustrates the lead role Deas had as an owner and symbol of the cannery. In 1877, the boom of competition from New Westminster canneries and disputes with rivals led Deas to sell the cannery a year after. Deas moved to Portland, Oregon with his wife and seven children where he died of illness in 1890. The salmon canning industry is a story of incredibly diversity and John Sullivan Deas’s life is one account of the success and struggle black Canadians faced in BC.

To learn more about Deas and other early black Canadian pioneers, the City of Richmond is holding the free presentation, “The Black Pioneers of British Columbia” at Thompson Community Center Monday, February 20th from 7 to 8:30 pm.

Posted by m.horita
New Fisherman’s Park mural unveiling in Steveston
Fun with Cribbage at the next winter market!