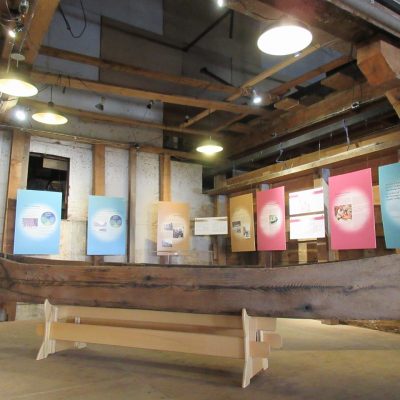 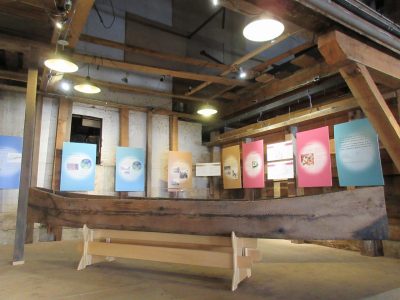 The Gulf of Georgia Cannery is located on Musqueam traditional territory at the mouth of the Fraser River. For millennia before canneries were established, Aboriginal people fished the Fraser River for salmon and other fish species. The Salmon People exhibit, currently on display in the Cannery, explores Aboriginal people’s relationship to the river and salmon fishing through time.

Salmon People also features a selection of fishing artifacts including a small dugout canoe. We don’t have a lot of information about where and when this canoe was made or used, but we do know that it was described as a Nuu-Chah-Nulth canoe when it was donated to Parks Canada in 1990. Nuu-Chah-Nulth First Nations territory stretches about 300km along the Pacific Coast of Vancouver Island.

Many different coastal and interior Aboriginal groups used similarly shaped dugout canoes for river travel. According to the Bill Reid Centre at SFU, a river canoe was “burned or adzed out to have similar shallow bow and stern profiles, and was usually quite a simple dugout form.” The canoe in the exhibit is just over 4m long but it feels larger in the exhibit space, filling the room from corner to corner.

The Salmon People exhibit was created in 2011 by Karen Lee with the support of Leonard Ham, Susan Point, Debra Sparrow, Leona Sparrow, Harold Steves, the Musqueam and Tsawwassen First Nations, and the Stó:lō Research and Resource Management Centre.

The exhibit will be on display through to September. I invite you to come see the canoe and enjoy the sights, sounds, and tastes of the Cannery Experience this summer.