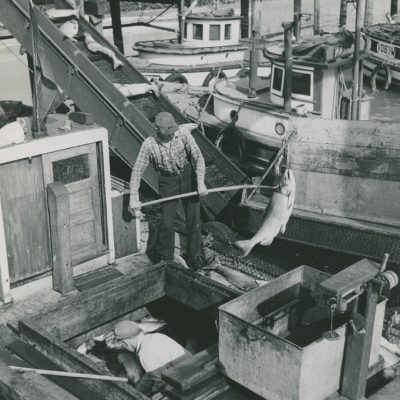 Have you ever seen fish being sucked up into a big tube?

Indeed! We have come a long way from peughing, or hooking fish one by one into processing plants.  Imagine working as a peugher in the year 1894, thick coats of fish slime flying, as you fling 30 pounders overhead into the cannery…

Luckily, such laborious transportation methods were quickly replaced following advances in technology. For instance, “fish elevators” – conveyers powered by steam, replaced peughers to bring tons upon tons of salmon onto the receiving floor. These improvements contributed to increased efficiency, and ironically, the eventual demise of the salmon industry.

In fact, by the 1940’s, the mainstay of the west coast fishing industry was no longer salmon, but herring. Initially, these tiny fish were transported on Marine Leg Bucket Elevators, originally created to transport buckets of grain. Like the name suggests, the machine scoops buckets of herring up and dumps them into storage bins.

It had the capacity of transporting 45-75 tons of fish per hour- quick, but not quick enough!

The Bucket elevators were replaced in 1951 by the Yeoman brother’s system which had a capacity of over 100 tons per hour! What contributed to the increased efficiency, was none other than a giant vacuum which would literally suck up tons of fish from the boat’s hold with the help of hydraulic power.

This change cut down on not only the unloading time by 40%, but also man hours by 50%. The Gulf of Georgia was in fact the first in B.C. to install the Yeoman system.

Today, similar technology is employed by fish processors as they bring in countless amounts of slippery fish. No more sore backs!

Posted by m.horita
International Women’s Day on the Homefront and in the Workforce
New public sales float in Steveston opening soon