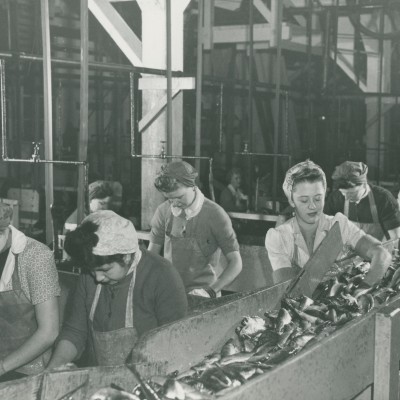 We have arrived at the tail end of Women’s History Month but I am just embarking on a research project about women’s contributions to the workforce, home life, and community during World War II for our next feature exhibit.

During World War II, factory work was promoted as a patriotic way for women to contribute to the war effort. At the Gulf of Georgia Cannery, it was not new to have women in the workforce, but more women were relied upon to fill roles traditionally held by the men who were now overseas. The Gulf of Georgia Cannery was producing canned Pacific herring which provided a cheap source of protein for troops. Nearby, women also worked at the Boeing Plant on Sea Island where, between 1942 and 1945, three hundred and sixty two Catalina PBY Flying Boats were built.

Women contributed to the war effort at home by recycling, composting, growing vegetables, reusing and donating clothes, rationing butter, sugar, and wheat, and collecting bones and fat. One pound of cooking fat provided enough glycerine to fire 150 bullets from a Bren machine gun.

I find it interesting that many of the strategies that women used in their homes to save for the war effort are the very same strategies that are popular today as we try to use less of the earth’s resources. We are reducing, reusing, and recycling now not because of war, but still for a world where future generations will be able to enjoy the same freedoms and standard of living that was fought so hard for during the Second World War.

Posted by m.horita
Is the Gulf of Georgia Cannery haunted?
From the Collections: A treasure trove of labels!