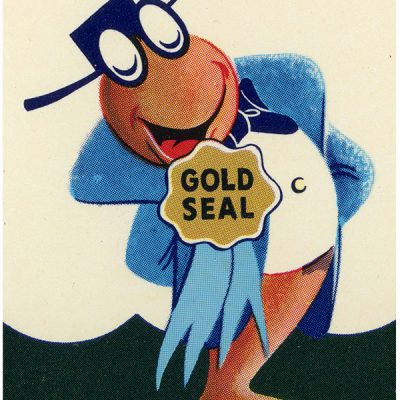 “The Label Unwrapped: The History of Canned Salmon Labels” is the Gulf of Georgia Cannery National Historic Site’s current feature exhibit, which recently opened in May 2019. In this blog series Shannon King, Manager of Audience Engagement, shares some insight into the new exhibit and the colourful stories behind the labels.

The label featured in the previous blog included a cartoon character. Did it remind you just a little of Pinocchio’s little friend Jiminy Cricket? If so, you have a good eye for Walt Disney’s style.

In the 1940s, children began influencing family spending, so companies started to design labels that would appeal to children. At that time, no one knew how to appeal to children better than Walt Disney. In 1943, the Canadian Fishing Company commissioned a set of characters, including “Sammy the Salmon”, from Walt Disney Studios.

In the 1950s, Sammy and his friends were the stars of three comic books that were distributed to school children to teach about BC’s salmon canning industry. One of those comic books, Pacific Rescue, is on display in The Label Unwrapped exhibit.