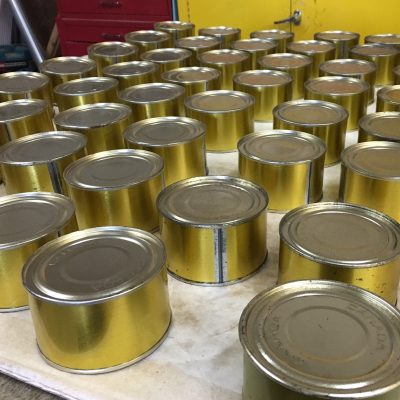 During the Second World War, people became experts at recycling and re-purposing items to support the war effort. This empowering WWII propaganda poster encouraged women to see this work as patriotic. Their contributions were substantial; one pound of cooking fat provided enough glycerin to fire 150 bullets from a Bren machine gun. Two pounds would fire 20 cannon shells from a Spitfire, or 10 anti-aircraft shells.

Sixty years later, the concept of recycling is again very important in our society, not now to save for war, but to use less of the world’s resources. “Reduce, Re-use, Recycle” has become known as the 3Rs. The third R, recycling, has gained the most traction and more recently, the second R, re-use, has seen an upsurge of popularity. Upcycling is the trendy word for re-using objects that are no longer needed or wanted by creatively transforming them into something useful.

The Women on the Homefront Exhibit is closing in April. As a last hurrah for what has been a very popular exhibit, we invite you to participate in our Tin Can Upcycling Contest.

Here are the rules:

Bring your family or friends together and get inventive! We can’t wait to see what you create!

UPDATE: Here’s a fun website to inspire you with ideas for upcycling tin cans.