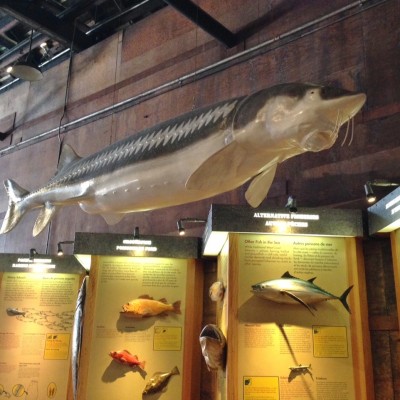 Many people travel to Vancouver to go fishing for white sturgeon on the Fraser River, but few have the thrilling experience that a young boy from New Jersey had this past week.  Keegan Rothman, who loves dinosaurs and fishing, was rewarded for his good grades with a fishing trip to Vancouver.  While here he was able to reel in a 242 kg. white sturgeon that was around 75 years old.  This sturgeon which was caught, tagged and released back into the river, was one of the largest fish caught in the recent past.  White sturgeon, which were fished almost to extinction in the early 1900’s, are still caught today along the Fraser River, but it is only catch and release as a complete ban on fishing them was imposed in 1994 in an effort to preserve the species.  Sturgeon are the largest fresh water fish and many of them can live up to 100 years. Read more about Keegan and his “living dinosaur” here.