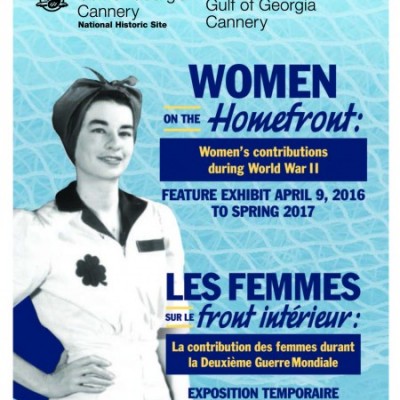 Our museum staff and volunteers have been very busy this week, putting the final touches onto the new Gulf of Georgia Cannery NHS feature exhibit: Women on the Homefront: Women’s contributions during World War II.

The new exhibit will open this Saturday April 9th, with an invite-only reception for society members, following our Annual General Meeting.

Women on the Homefront explores the fascinating contributions made by women toward the war effort, with a particular focus on the impact of their work in Canada’s west coast canneries and in their homes. The interactive exhibit invites visitors of all ages to do their part for the war effort. Try on a uniform and join the workforce, explore ration-conscious sugar free baking recipes, sit and knit, sort and recycle, or plant a row of vegetables in a ‘Victory Garden’.

The exhibit is supported by the Province of British Columbia’s Community Gaming Program, and Parks Canada. The feature exhibit will show daily from April 9, 2016 to Spring 2017.

Posted by m.horita
Winners of the 2015 Fishing the West Coast Photography Contest
Thank you to our volunteers!