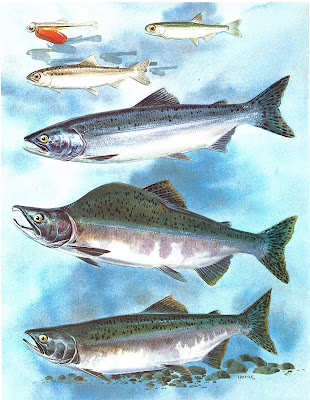 “You like the humpies?” my fisherman friend inquired, when I told him that I was looking forward to stocking up on pink salmon this year. The DFO is projecting a run of 17 million, half the amount of last year’s Fraser sockeye run.

“Humpies” is another term for pink salmon. When the males swim upstream to spawn, they go through physiological changes (much like the sockeye do), and develop a prominent hump on their backs. Pinks are among the smallest of the salmon family, weighing an average of 4.8 pounds. They have a two-year life cycle, and on their second year, they migrate back to the stream or river of their birth to spawn. Salmon from the odd and even years won’t spawn with one another.

Pink salmon is not as favoured by consumers, especially when they’ve been spoiled with the rich taste and flavour of sockeye salmon.  Others prefer pink, as it is lighter in flavour than other salmon. But I would argue, a fish is a fish is a fish, and if that fish is fresh, it is still enjoyable. As sockeye is a valued commodity, it is more expensive; pink is easier on the wallet. On the market, there is less demand for pink salmon, and as such it is more commonly canned, smoked, and salted, and then exported to countries abroad. Locally, this may change, as BC pink salmon has just been MSC certified, meaning that it is considered to be a sustainable resource. This may not have any impact on the quality and taste of the meat, but it certainly increases the fish’s marketable value.

Pink salmon inhabit the Pacific ocean and Arctic waters, and can be found along the Alaskan coast, British Columbia coast, in Korean waters, and as far south as the Japanese Pacific coast.