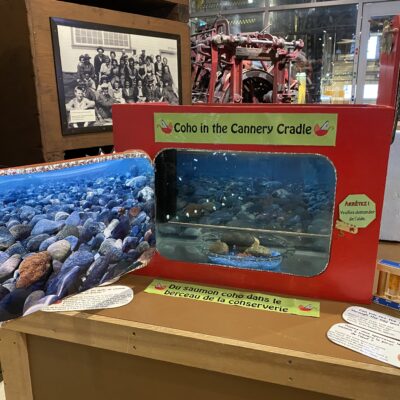 After three months of caring for 30 coho salmon from egg to fry stage, our Head Interpreter Andrea returned to Little Campbell River Hatchery in Surrey BC during Spring Break, and carefully released them back to the river.

If you follow our social media, you may have seen our “Salmonids in the Classroom” journey, as we started last December with 30 eyed-eggs in a temperature-controlled tank right in our front lobby, offering occasional viewings by our visitors and staff. In early January, the first eggs began to hatch, and we were treated to the most curious of the salmon life cycle stages – the alevin stage – as the little salmonids carried yolk sacs on their bellies from which they would draw their nutrition. We watched as the eggs sacs grew smaller, and their bodies grow larger. Then, in February, the salmonids began to “button up”, absorbing the last of their yolk sac, but still swimming low at the bottom of the tank.

One by one, the salmonids began to fill their swim bladders, swimming higher in the tank, up and down with ease. It’s a bit of a mystery how they do this but they manage to get up to the surface to gulp some air, which fills their swim bladders and allow them to happily zip up, down and sideways in the tank.

At this stage, we started to feed the salmonids, and with feeding came… “waste”, which made it more difficult to maintain low ammonia in their water. By the beginning of March, we were replacing part of their tank water every second day. This signaled that it was time to return them to the hatchery, and when we removed each fry carefully from the tank, we were delighted to count that all 30 salmonids had survived!

We would like to thank the Fisheries and Oceans Canada’s Salmonids in the Classroom program for allowing the Gulf of Georgia Cannery NHS to participate each year. We are grateful for the educational opportunity that it allows our staff, volunteers, visitors, and local Steveston neighbours to enjoy, as we marvel at how precious the salmon life cycle is, giving us a greater appreciation for the fragility of the species.

Posted by m.horita
From the Cannery Cradle: The Salmonids Are Swimming
National Volunteer Week 2021