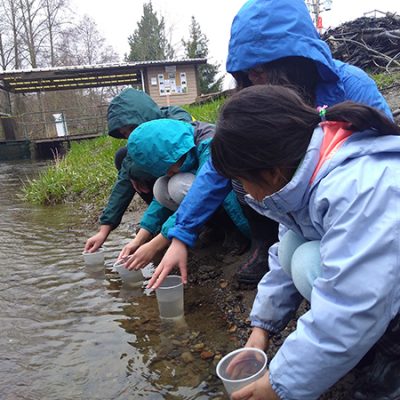 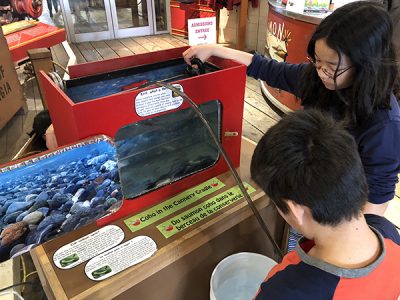 If you’ve been following our blogs, you will know that once again this year, we had the pleasure of participating in the Fisheries and Oceans Canada’s Salmonids in the Classroom program.

We first received the coho when they were in the eyed-egg stage in December, and kept their water a nice cool steady temperature of 6-7C, until they started to hatch into alevin in January.  Just one month later, the alevin started to transform into fry, after which we began to feed them tiny 1/16 teaspoons of krill, 4 times a day.

Soon, we would have to keep a close eye on the ammonia levels of the tank’s water, because with feeding comes…. well, dirtier water than without feeding!  Once the fry were strong enough and the water could not be kept clean enough, it was time to take them back to Little Campbell Hatchery, where the eyed-eggs had originally come from, to prepare them for release back into the river. Last week, on March 29th, some students from Pacific Rim Montessori, who have helped us to monitor the salmonid this year, carefully transferred the fry back to the hatchery – we’ll have another blog to go into detail about the release at a later date… stay tuned!