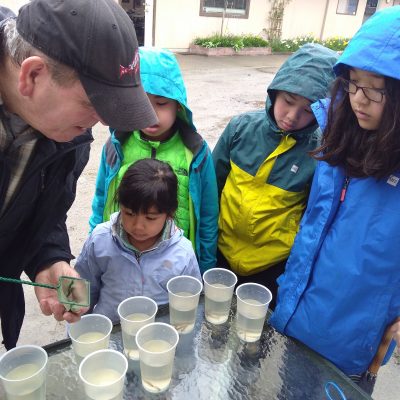 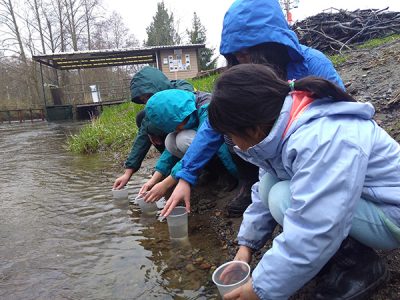 When the day arrived at the end of March, it was with mixed emotions that we prepared to release the salmon that had been with us at the Cannery for a little over three months. After scooping 48 fry out of their tank, we made our way to Little Campbell Hatchery in Surrey. We were met by Roy, from the Semiahmoo Fish and Game Club which maintains the hatchery.

Roy took us on a tour of the hatchery and showed us where salmon eggs develop under special conditions until they become eyed-eggs to be transported to Salmonids in the Classroom (or Cannery!) participants. Some students from Pacific Rim Montessori Academy were able to join us on this adventure and were amazed by the tens of thousands of salmon fry in the various holding tanks waiting for their release. They also had the opportunity to feed salmon in a protected outdoor pond, as they eagerly watched the water surface come alive with hungry fish flipping out of the water.

The highlight of the day was of course the actual release of the coho fry into Little Campbell River. In order for the fry to adjust to the new water conditions, Roy mixed some of the river water with the water from the Cannery. We were surprised to find out the river water was about 2°C warmer than the temperature the tank had been maintained at! Cups were filled with the water mixture and then Roy carefully netted a few fry into each cup. With a hand over the cup opening, the children carefully made their way down to the water’s edge. Each cup was placed right side up in the shallows of the flowing water. After a quick pep talk with the fry (“Eat lots! Watch out for predators! Hide!”), the children tipped their cups and the salmon fry quickly disappeared into the river. We hope that many of the fry survive their first year in the river before making their way out to the ocean next spring.

From eyed-eggs to alevins to the final release of the fry, the Cannery staff enjoyed this year’s salmon experience with these aquatic stewards in the making.