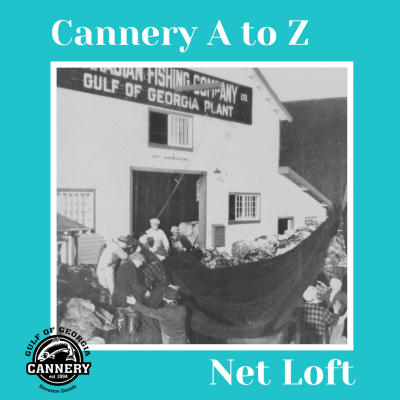 Why are most of the boats in Steveston Harbour empty of nets? For those who enjoy boat-watching as much as we do, you may notice that commercial fishing vessels docked in the harbour are usually not carrying nets. Fishing for salmon is seasonal, which means these nets spend many months in storage, where there is also plenty of time to clean the nets and to make repairs. Did you know that the Gulf of Georgia Cannery did not just can salmon, but has also been a place to store and mend fishing nets.

The upper floor in the Cannery was used to house smaller nets, like gillnets that were used to fish salmon on the Fraser River. Even small fishing nets need a lot of space to hang in storage, and any time more space became available at the Cannery, the nets were moved in. In 1906, space for a 90-person butchering crew was no longer needed because a machine had been invented to do their work, so some nets were stored in the butchering shed. When the Cannery stopped canning salmon in the 1930s, there was no need to keep nets in the butchering shed anymore; without canning machinery there was now plenty of space on the main level of the Cannery. Then, in 1932, the old butchering shed was blown down in a storm, paving the way for a new, dedicated Net Loft building to be built, and it still stands next to the Cannery today. The Net Loft building was used to work with seine nets, which are larger than gillnets, and was used by the Canadian Fishing Company (Canfisco) until September 2019. A new net loft building has been constructed just a few metres away from the Cannery in the lane heading west to Garry Point Park. Cantrawl Nets Ltd. stores and manufactures trawl and other types of nets that are used for commercial fishing and research.