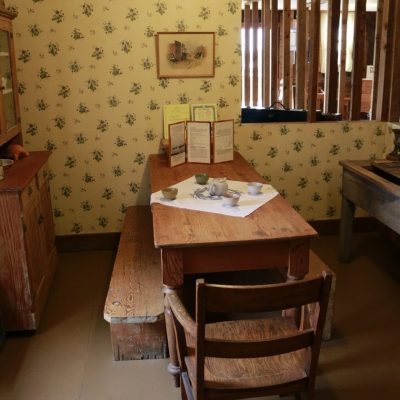 In Part 2 of a blog series by the Society’s Youth Leadership Volunteers, Hania describes their experience during a field trip to explore the topic of ‘accessibility’ at Steveston’s heritage sites. Photos by Jason W.

All throughout Steveston, there are clues and hints to its rich past. In the museums and historic buildings, there is a story best told only by them. When the Leadership Team recently visited these places, we learned about Steveston’s vast history.

We started at the Cannery, where we learned about the fishing and canning history of Canada’s West Coast. As a Parks Canada national historic site, there are exhibit text panels in both English and French, as well as guided tours in both of Canada’s official languages. We also found ramps for ease of walking, and many places to relax or play; this was another point we paid attention to during our trip — Accessibility.

At the Steveston Museum and Japanese Fishermen’s Benevolent Society Building, we spoke to Rachel Meloche, Executive Director of the Steveston Historical Society.  The museum building was originally a bank, and the Japanese Fishermen’s building is now home to an exhibit that presents the history of Japanese Canadians who lived in Steveston. We also spoke about accessibility and noted how there were ramps and bright lighting on text panels.

Next, we took the walk over to Britannia Shipyards NHS, using the boardwalk as our path. There were many great places to sit to rest and admire the view along the way. Once we reached Britannia, we explored the wide array of buildings that ranged from small to gigantic!  We did a self-guided tour, so we took our time to really dive in deep during the visit. We grasped the story of work on the coast, but mostly the way of life for these people.

On our way back to the Cannery, we took a stop at the Steveston Interurban Tram. We were immediately greeted by a lovely interpreter who went into great detail about the Tram’s history. The tram used to travel all the way down to Steveston from the Marpole neighbourhood in Vancouver, and transported many people who worked at the docks until its last trip in 1958.

Overall, this was a very inspirational trip that we took on foot, which lasted about four hours! We would highly recommend visiting these historic sites in Steveston.