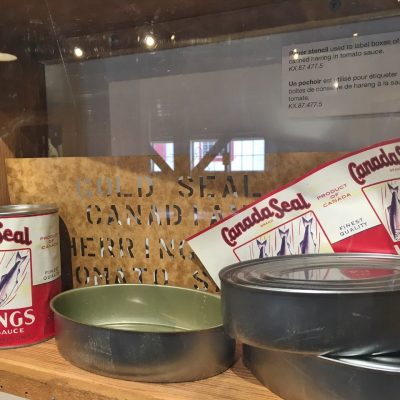 One of the things that I love most about working here at the Gulf of Georgia Cannery is being able to chat with people from all around the world. They always have interesting stories to tell and provide a fresh perspective on information that can sometimes get repetitive.

The most memorable story a guest has ever told an interpreter was from a while ago, back in the fall of 2012. After a tour, one visitor came up to the guide and told her that he was a World War II veteran from the West Coast. He told her that while he was training in England during the war, his unit was fed canned herring every day for breakfast—a product very similar to what the Gulf of Georgia canned in the 1940’s. Apparently it was so disgusting (canned fish in tomato sauce!) that the men started throwing it in the trash. This happened every morning for a week and a half. That is, until the doctors got so concerned that the men were not eating that they told the officer to order some better food. They had porridge for breakfast every day from then on!

See our “Women on the Homefront” exhibit, on display until Spring 2017, which includes stories of women who worked in the local canneries to process herring for the men away at war.