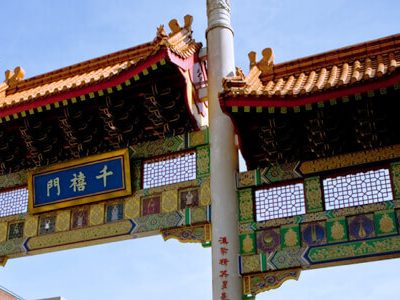 In Part 7  of a blog series by the Society’s Youth Leadership Volunteers, Hania describes the team’s tour of Vancouver’s historic Chinatown.

For their second outing as a team, the Cannery’s Youth Leadership Volunteers went on a field trip to somewhere a little further away from Richmond  – they were given a tour around Chinatown! There, they learned about the interesting history of how Chinatown came to be, as told through the lasting markers still to be seen in the neighbourhood today.

After taking the Canada Line from Richmond to Chinatown, the group met Judy Lam Maxwell and Steven Wong at the restaurant Sai Woo and started their walk from there. There took frequent pauses and breaks to admire historic buildings and to enter popular stores. They learned about the many groups of peoples and clans who are very prominent in Chinatown, including the clan organization houses. There were occasional historical colourized pictures displayed around they community, which unearthed the history of discrimination. This led to conversations on the topics of head tax and unfair work ethics. Today in Chinatown, you can see a developed community that has risen from its past.

The wonderful trip to Chinatown was much appreciated and definitely one worth making!