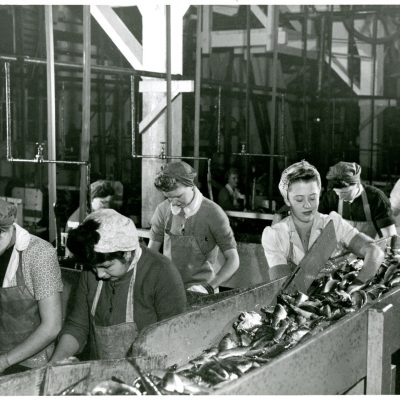 On March 8, International Women’s Day, we acknowledge the struggles and celebrate the changes made by women around the world as they strive for gender equality. As the 2017 theme of International Women’s Day from the United Nations focuses on “Women in the Changing World of Work: Planet 50-50 by 2030,” our feature exhibit, Women on the Homefront, similarly highlights women’s roles in the workforce, and recounts the emergence of Canadian women into fish canneries, gaining new roles that were traditionally held by men.

While Steveston canneries had always been employing Japanese, European, and Indigenous women to clean and pack cans, World War II created greater opportunities for women to work in different roles such as machinery operation and butchering, all of which was done by men before they went off to serve in the war. Women’s contributions to the workforce were immense, with hundreds employed at the Gulf of Georgia Cannery producing canned herring rations that would be a major food for troops overseas.

Women’s domestic, unpaid labour also played a crucial role in the Canadian war effort. Knitting “service scarves” and socks, tending to “victory gardens”, selling war bonds, recycling and rationing home products all happened on the homefront, and fostered patriotism. However, not all women were welcome to work in factories or at home. February 24, 1942 marks the day that the Canadian Government expelled all people of Japanese descent from the Pacific Coast, including the hundreds of Japanese women that sustained the local canning industry.

Today, we commemorate the accomplishments of women in the past decades to overcome the barriers of gender inequality in the fish canning industry! However, we must not forget to recognize the needs to resolve issues such as gender pay gaps, unpaid domestic work, access to leadership roles, and rights to child care globally. To learn more about how women changed Canada’s history forever, visit the Women on the Homefront exhibit. Open until mid-April 2017.

Posted by m.horita
Fun with Cribbage at the next winter market!
Onwards and upwards: the transportation of fish through the ages